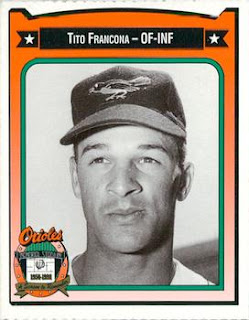 Some somber news this week, as 15-year MLB veteran John Patsy "Tito" Francona passed away at age 84. Most fans today probably know Tito best as the father of current Indians manager Terry Francona, who himself is affectionately known as "Tito". But the elder Francona made his name as a corner outfielder and first baseman for nine big league teams, most notably having a six-year stint with the Indians. In 1959 he batted an astounding .363/.414/.566 (171 OPS+) in 122 games for Cleveland, finishing fifth in AL MVP voting behind the Hall of Fame White Sox trio of Nellie Fox, Luis Aparicio, and Early Wynn, as well as Tito's teammate Rocky Colavito. The following year, Francona led the league with 36 doubles, and in 1961 he made his lone All-Star team while batting .301 and driving in a career-best 85 runs.

Tito actually started his major league career in Baltimore, serving as the team's primary right fielder in 1956. His batting line of .258/.334/.378 with nine homers and 57 RBI wasn't amazing, but fair enough for a 22-year-old novice. He only appeared in 97 games with the O's in 1957, slumping to a .233 average before being dealt to the White Sox in a seven-player trade that briefly made future Hall of Famer Larry Doby an Oriole. (Doby was swapped again to the Indians on the eve of the 1958 season in a five-player transaction.)

Farewell, Tito Francona. See you in a better place.
Posted by Kevin at 9:49 PM

I sure did. Yikes!