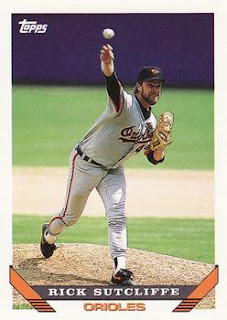 My posting frequency on this blog may have left something to be desired over the past few years, but compared to the activity on my 1993 Topps blog, I've been downright prolific in this space. Before I finally got around to posting card #494 from the base set last weekend, I hadn't touched that blog since October 14...of 2015. In other words, the last time I updated my other blog, we hadn't moved into our current house, we didn't even know that we were going to be parents, and we were still a year away from asking WHY THE HELL BUCK DIDN'T USE ZACH BRITTON IN TORONTO AUUUUUGGGHHHH. But I had a lot of fun collecting that set when I was 11 years old, and in revisiting the blog last week, I remembered that I'd had a lot of fun retrospectively diving into the set on a card-by-card basis. For instance, in doing a little quick research for my post on this Rick Sutcliffe card, I learned that Sut held Barry Bonds homerless in 51 career meetings between the two. That's the most plate appearances that Bonds had against any pitcher without going deep. If you're interested in more tidbits like this, go ahead and check out my other recently-revived writing project. It's a breezy look at a bunch of cards that I can't believe were released 25 years ago.

Oh, and FYI...today's 1993 Topps blog post was number 500. (It's card #495 in the base set, but I've also done a couple of general announcement posts and the three Gold card parallels that replaced the Series One checklists. But I digress.)
Posted by Kevin at 10:32 PM