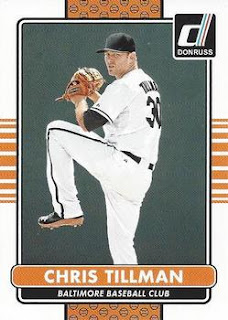 I'd say that the Orioles are getting the band back together, but technically Chris Tillman never left. All the same, I spent much of this offseason figuring that the righty's decade in the Baltimore organization had come to an end. Tilly's 2016 was as disastrous as it gets for an impending free agent. A lingering shoulder injury cost him the first month-plus of the season, and his return on May 7 doubled as his only win of the season. He went 1-7 with a 7.84 ERA, allowing 81 earned runs in 93 innings. Every number you can find was hideous: 24 homers allowed, 51 walks against just 63 strikeouts, 125 hits. Opposing hitters batted .324/.406/.575; essentially, Chris turned every opposing batter into Mike Trout.

But I'm in danger of belaboring the point. Tillman was a 16-game winner with a 3.77 ERA as recently as 2016, he won't turn 30 until April (which I was surprised to learn), and the O's are not exactly flush with strong starting pitching options, even after picking up Andrew Cashner last week. So I don't see the harm in giving Chris a guaranteed $3 million to see if he can return to good form and health in 2018. I won't necessarily be expecting anything like that, but I think it's better to be pleasantly surprised than disappointed.
Posted by Kevin at 9:33 PM

I am very perplexed with the Orioles this year and I feel we are in for a long season.
Hope I am wrong

Seems to me the Os are neither rebuilding nor reloading. They seem to be just bopping along hoping it gets better on its own. I'm pretty pessimistic but I'll be right there when they play in Houston...as the Astros Opening Day opponent this year. I'll be the only guy in the place not going nuts over the ring presentation.

Alan - Same here. Fortunately for us, they don't play the games on paper. If this year's team is a contender, well, stranger things have happened...look at the 2012 and 2014 teams for proof.

Bob - I bet the ring ceremony will be an interesting sight nonetheless!