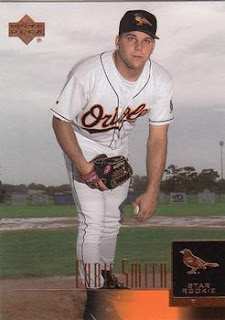 I'll cut to the quick: Chris Smith never made it to the major leagues. In an era of top draft pick misfires for the Orioles, the stocky lefty from Cumberland University in Tennessee was one of the most glaring busts. The O's selected Smith with the seventh overall pick in 2001, pegging him as a pitcher despite his strong track record as an outfielder in college. He'd batted .375 with 14 homers and 66 RBI as a sophomore at Florida State, earning second-team All-American honors. He'd taken the mound sparingly, totaling 16.1 innings in two years at FSU. When Seminoles coach Mike Martin rebuffed his request to focus on pitching going forward, he jumped to Cumberland and struck out 115 batters in 84.1 innings. As a hitter, he posted a .414 average, 17 homers, and 67 RBI.

Those 84.1 innings that Chris pitched as a collegiate junior were more than he would total in the Orioles' organization. A left shoulder tear derailed his progress, and he had a cumulative 7.52 ERA in 24 games in the minors. The Birds cut their losses in 2005 after Smith allowed 25 runs in 26.1 innings of relief with the Delmarva Shorebirds. He finished the season - and his pro career - in the independent Atlantic League with the Long Island Ducks, putting up a much more reasonable 4.14 ERA in 25 appearances. The southpaw spent several years as the hitting and outfield coach at SUNY College at Old Westbury, though my Google-fu shows that he's no longer with the school. Meanwhile, the only real success story for Baltimore in the 2001 draft came in the form of fifth-round pick Jim Johnson, a right-handed pitcher from Union-Endicott High School in New York.
Posted by Kevin at 8:53 PM