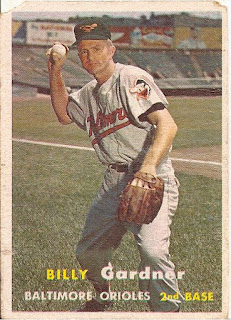 Things to know about Billy Gardner:

-His nickname was "Shotgun", due to his strong throwing arm.

-He played eight minor league seasons before debuting with the Giants in 1954. Though he didn't see action in the World Series that fall, he did receive a winner's share of $11,147.90.

-During the 1956 season, Billy hit a pair of home runs off of Athletics pitcher (and future Dodgers manager) Tom Lasorda.

-On August 13, 1957, he hit two homers and drove in three runs as the Orioles topped the Senators 5-3. His two-run shot off of Joe Black in the top of the ninth was a tiebreaker, and it provided the winning margin.

-After his playing career ended in 1964, Gardner spent more than two decades as a coach and manager. He skippered minor league teams affiliated with the Red Sox, Royals, and Expos, helming five first-place clubs. From 1981-1985, he managed the Twins, peaking with an 81-81 third-place finish in 1984. On June 21, 1985, he was fired and replaced by longtime Orioles pitching coach Ray Miller. Billy also served as manager of the Royals in 1987 after Dick Howser had to step down for medical reasons, but was let go in late August.

-His son, Billy Jr., was a 50th round draft pick of Kansas City in 1987 and has been a minor league manager since 1995. He is currently with the Nationals' AAA Syracuse Chiefs club.

Great story on Gardner. Thank you