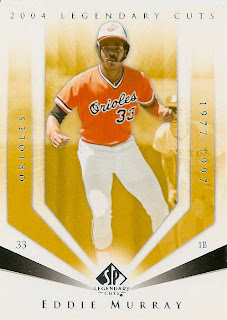 On this date in 1977, Eddie Murray was named the American League's Rookie of the Year. At just 21 years of age, the native Los Angeleno appeared in all but one of the Orioles' 161 games, starting at designated hitter 110 times and spelling Lee May at first base in 42 contests. He even mixed in a handful of games in left field. Steady Eddie batted .283/.333/.470 (123 OPS+) with 29 doubles, 27 homers, and 88 RBI. He tied May for the team lead in homers, and trailed only May and Ken Singleton in RBI (they had 99 each). All this for a 97-win club that finished just two and a half games behind the Eastern Division champion Yankees. Murray bested Oakland's Mitchell Page (.307/.405/.521, 21 HR, 75 RBI, 42 SB) in a close vote, with Bump Wills and Dave Rozema also receiving consideration. Page had the more impressive numbers overall, but Murray undoubtedly received extra credit for being on a contending team, hitting more dingers, and being a certified, stone-cold badass.
Posted by Kevin at 5:59 PM