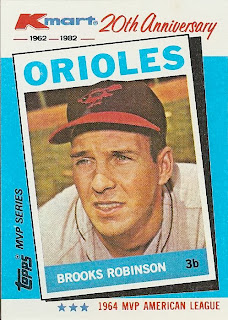 As you may have noticed, there is no greater balm for baseball blogger writer's block than the birthday post. Well, here's one better: a birthday post about a birthday post. Chris Jaffe of The Hardball Times has posted a list of trivia tidbits about baseball players and their birthdays. Among the things I learned was that Brooks Robinson, born May 18, 1937, somehow played only a dozen games on his special day in the span of his 23-year career. However, he hit safely in all 12 birthday games, the longest such streak in baseball history. His overall birthday stats included a .435 batting average (20-for-46) with a double, a home run, and five runs batted in. He walked twice and struck out twice and hit into only one double play. His best May 18 game was a 1971 contest at the Yankees. Brooksie had just one hit in four tries, but it was a two-run homer off of Fritz Peterson in the fourth inning. It gave the O's a 3-1 lead which they would not relinquish. So I guess you could say that Baltimore's beloved third baseman was able to have his cake and eat it too.
Posted by Kevin at 10:22 PM

I went and read that column and I can't imagine how much time all that research took.