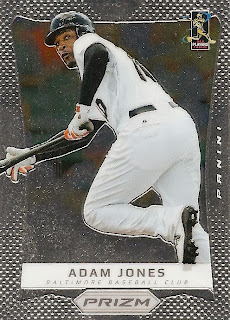 Adam Jones, Chris Davis, J. J. Hardy. Just like that, the Orioles claim ownership to three Silver Slugger Awards in one season for the first time in team history. These awards are given out to the best offensive player at each position in both leagues, and all three Birds are first-time winners. In fact, Jones is the first O's outfielder to ever win a Silver Slugger. Davis and Hardy are in rarified air as well: Eddie Murray and Rafael Palmeiro are the other pair of Baltimore first basemen to be so honored, and Cal Ripken and Miguel Tejada are the two previous shortstops on the team list. As a matter of fact, Aubrey Huff was the last Oriole at any position to claim this prize, based on his strong DH performance in 2008. I don't expect Chris Davis to beat out Mike Trout and Miguel Cabrera for the big prize (American League MVP) when those results are announced in a week, but the rest of the league is serving notice that these aren't the same cruddy Orioles.
Posted by Kevin at 4:00 PM