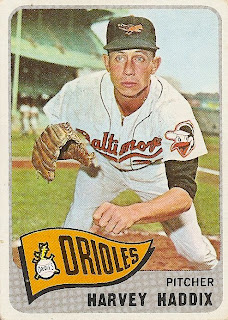 On this date in 1963, the Orioles acquired three-time All-Star Harvey Haddix from the Pirates in exchange for minor-league shortstop Dick Yencha and cash. The 38-year-old southpaw, who'd won 20 games with the Cardinals a decade earlier, was used strictly as a reliever by Baltimore manager Hank Bauer. Haddix excelled in the role, finishing second on the 1964 O's with 49 pitching appearances and clocking in with a 2.31 ERA. He went 5-5 and saved 10 games in support of Stu Miller, who paced the club with 23 saves. "The Kitten", so nicknamed for his resemblance to Harry "the Cat" Brecheen, struck out 90 batters in 89.2 innings and allowed only 23 walks and 4 home runs. He was less effective in 1965, which proved to be his last season in the big leagues; the lefty equaled his previous season's total of 23 walks in just 33.2 innings of work. He still fashioned a 3.48 ERA, but that was only by the grace of 9 unearned runs on his ledger. But Harvey's 1965 struggles don't change the fact that he contributed in a meaningful way to the 97-win Orioles of 1964.
Posted by Kevin at 7:08 PM