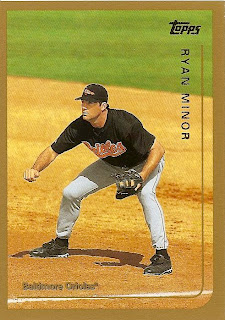 There's something incredibly eerie and lonely about this photo. Ryan Minor is just readying himself for a line drive down the first base line, but because of the zoom and the angle, it looks like he's the only man left standing on the diamond. There's nothing but arid infield dirt, dull outfield grass, and a man's own shadow. He remains vigilant against an opponent that may never come.
Posted by Kevin at 11:26 PM

I glad you saw the lonliness angle for this card - otherwise I would say that it is just lazy cropping. You'd have thought they could have gone in a little closer to make it more interesting. Now I am reconsidering that for the loneley first baseman tag.