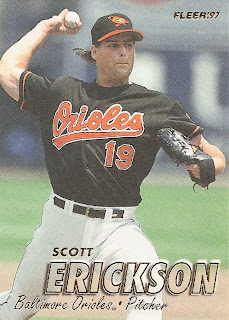 Last night, Wei-Yin Chen became the first Orioles pitcher to win a postseason game at Camden Yards since Scott Erickson twirled eight shutout innings against Jim Thome and the Indians in Game One of the 1997 ALCS. That particular game took place 15 years ago yesterday; hopefully, this playoff series has a much happier ending.

As I mentioned yesterday, I braved the suddenly chilly October weather to stake out a spot on the standing room only flag court in right field with my father. It was his birthday gift, though in the future I'll be more inclined to pay a bit extra to ensure that we can actually see what the hell is happening on the field. (To be fair, we had a fairly clear view of balls hit to the left side of the field. Otherwise, we relied on crowd noise and the ball-strike-out counter on the scoreboard to fill in the blanks.)

Ah yes, the crowd noise. Even though our view was less than ideal, the overall experience was phenomenal. I never went to any of the O's postseason games in 1996-1997, so I had never been immersed in a deafeningly loud and boisterous Oriole Park. The white "BUCKle UP" towels that were handed out at the gates were whipping around in a frenzy all night, and the sellout crowd of 48,187 was in full throat for most of the night. There were all of the usual chants: "Let's Go O's!" "Ohhhh-Ohhhh-Ohhh-Ohhh-Ohhhhhhhhhh (to the tune of the White Stripes' 'Seven Nation Army')", and of course, "Yankees Suck!". I would never advocate vulgarity toward the visitors, of course. By that same token, I certainly didn't approve of the "Swisher sucks" chants that the bleacher bums directed at New York's obnoxious right fielder. Nope, no sir. Ahem. When sidearming reliever Darren O'Day struck out Alex Rodriguez in the seventh inning, he was serenaded with "O'Daaaaay! O'Day, O'Day, O'Daaaaaaay! (think "Ole!")". You know the fans are having fun when they're singing for the setup men. And when Jim Johnson rebounded from his uncharacteristic Sunday night implosion to save last night's 3-2 win with a perfect inning...well, I'll let the video do the talking.

Oh, I forgot to mention the one perk that came with my choice of tickets. Shortly after entering the park, I had just bought a beer out on the Eutaw Street concourse. As I wandered into the flag court to look for my dad, the Yankees were taking batting practice. I heard the buzz from the crowd out there, and looked up to see a ball sailing over the cluster of fans at the front of the court. It was getting closer, and closer...I tried to brace myself for impact, shrugging my left shoulder toward my face. The ball actually glanced off of my jaw and landed cleanly in my open left palm. There I was, clutching a batting practice ball in my left hand and a beer (unspilled!) in my right. Right place, right time, and one hell of a memento for my first-ever playoff game. 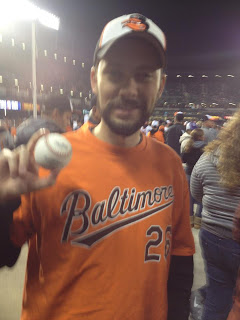