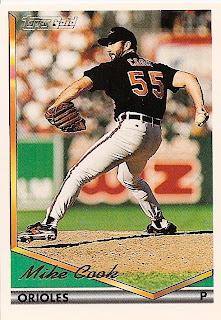 This is a card that I've yearned for ever since I learned that it existed, and a few weeks ago I finally brought it into the fold. From 1992 through 1994, the first three years that Topps inserted Gold parallels into packs of its flagship product, they replaced the boring ol' checklist base cards with Gold cards featuring seemingly random players who didn't make it into the regular set. In the case of Mike Cook, they really went digging.

Mike Cook was the Angels' first-round pick (19th overall) out of the University of South Carolina in 1985. He made his big league debut the following year, giving up nine runs in as many innings. He bounced between the majors and minors through the rest of the decade, putting up a 5.80 ERA in 37 relief appearances and a couple of starts. One of the few highlights came on April 21, 1987, when he earned his first and only major league win with three innings of scoreless relief against Oakland. He even struck out Mark McGwire in that game. But after splitting the 1989 season between Minnesota and the Twins' AAA Portland team, Cook couldn't crack an MLB roster in 1990...or 1991...or 1992. He signed on with the Orioles for 1993, and did well enough in relief at AAA Rochester: 6-7 with 13 saves and 3.10 ERA in 81.1 innings. The O's gave the 29-year-old a token September promotion, and he tossed three shutout innings in a pair of mop-up appearances. Early on in 1994, the Birds cut him loose and he latched on with the Mets' AAA Norfolk club. He was even better than he'd been the previous season (2.05 ERA, 59 K/57 IP), but didn't get another look in the majors and apparently called it quits.

For three lost innings late in the season for a third-place team, Mike Cook earned his only Topps card. What's more, the photograph depicts his final career appearance: Sunday, October 3, 1993. In the season's final game, he kept the Blue Jays' B-team from scoring in the seventh and eighth innings, closing the book on his own career by retiring rookie Carlos Delgado on a popout to Cal Ripken, Jr. I can't tell you how much this card genuinely delights me.
Posted by Kevin at 6:56 PM