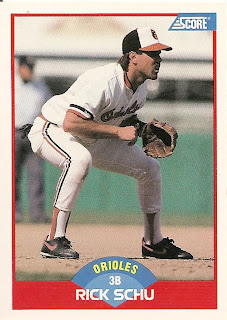 For reasons that I can't begin to imagine 25 years later, the Phillies played a young Rick Schu at third base in 1985 and shifted the excellent Mike Schmidt to first base.

In other Orioles-Phillies crossover news, I'm sure you're dying to know how my sojourn to the City of Brotherly Love went. I had a great time. Citizens Bank Park is a beautiful stadium, with a nice open view of downtown Philadelphia. The food choices were of course plentiful, and we opted for crab fries from Chickie's and Pete's (french fries with Old Bay - hard to screw up) and pit beef sandwiches from Bull's Barbecue. The "Bull" is of course former Phils slugger Greg Luzinski, who had his moments as a player but was no Boog Powell. Likewise, the beef was tasty but didn't quite measure up to Boog's - a little too dry and crumbly. As for the beer, they had stands spaced out evenly throughout the stadium that offered both domestic and craft options, and there was no difference in price, which left a good impression on this beer snob. Thumbs up to the Hop Devil.

As far as the game goes, we had a great vantage point from section 418, high above the field but smack behind home plate. It was hot but not oppressively so, and got pretty comfortable once the sun went down. We were treated to a strong performance by Cliff Lee, who struck out 11 in 7.2 innings. Ryan Howard provided most of the offensive fireworks with a perfect 4-for-4 evening with a walk, a pair of doubles, a home run, and 3 RBI. (By the way: there is a big neon Liberty Bell in the outfield that swings back and forth and lights up red and blue when a Phillie goes deep. They also play a clip over the PA of the late, great Harry Kalas shouting, "That ball is OUTTA HERE!". Nice touch.) The only disappointment came when Howard, needing a triple for the cycle, drove a ball to deep center field just out of the reach of Pirates center fielder Andrew McCutchen. It hit the wall and rolled away, but Howard pulled up at second. I doubt he would have made it to third, but there was a chance. The other excitement for the evening was provided by the Phillies debut of Hunter Pence, acquired 24 hours earlier in a trade with the Astros. He went 1-for-5 with an RBI single and was cheered wildly both before and during the game. The final was a 7-4 win for the home team, delivered in a tidy three hours.

Since I've already devoted two full paragraphs to the Phillies, I'll share an Oriole-related anecdote. As promised, I wore my Oriole cap to the game. The O's had already lost the first half of the doubleheader with the Yankees, 8-3, and when Ryan and I went for a beer during the third inning, I got a score update on my phone that they had fallen behind 2-0 in the first inning of the nightcap. I was annoyed, but not surprised. When we made it back to our seats, a guy behind me noticed my hat and mockingly asked me what happened. He motioned out to the out-of-town scoreboard, and I saw to my horror that several more Yankee runs had scored and the first inning was not yet over. At that point the guy sitting to my left piped up, and it turned out he was a New York fan. He offered some good-natured sympathy, and we kept following the progress of the game as it escalated to 8-0, 9-0, 12-0...he even bought me a beer out of pity. So that's where we stand in the world, Oriole fans.
Posted by Kevin at 10:35 PM

I went to a Phillie game in Colorado last September, and the Phillie fans were HORRIBLE. I know it's not representative of every Phillie fan, but it left a bad taste in my mouth. Now i basically always root against the team - just so I can think of those obnoxious fans crying. :-D

Kepler - Sorry to hear that! But then, I feel that way about a few AL East teams myself...

Kevin, I remember reading in the paper back then that owner and self-proclaimed GM Bill Giles sat around with his know-nothing yes men and scribbled the Phillies' "team of the decade" on cocktail napkins, including 3B Rick Schu, C John Russell, SS Steve Jeltz, and OF Jeff Stone. (remember, I said know-nothing)