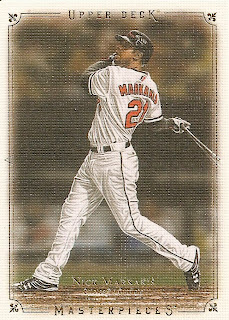 This is going to be quick and dirty, as I attended tonight's ugly, forgettable game and I've got a 6 AM wakeup call coming tomorrow. One of the few high points of the game - and one of the most impressive moments I've witnessed at Camden Yards - was the absolute bomb that Nick Markakis hit onto the right field flag court in the third inning for his 100th career home run. I can't remember many harder-hit balls in Oriole Park, and it's been a pleasure to witness most of Nick's homers during his six-year tenure in Baltimore. He's only the 21st Oriole to reach the century mark. Kudos to you, Nick. Wish we had a few more of you.
Posted by Kevin at 11:32 PM

Its pretty cool that he is the 21st to reach 100 in an O's uniform because 21 is his jersey number. It funny how things like this work out in baseball.

Ryan - Hey, I didn't even think of that! Good thing you came by to lend us your brainpower.