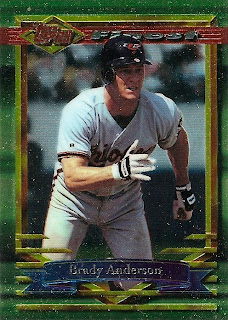 Posting this because it is the oldest Topps Finest card that I own, and I didn't even realize I had it until I went rifling through my 1993-1994 box waiting for something to leap out at me for tonight's card. I was rifling through said box because motivation for thoroughly planned and researched blog entries rarely strikes when your favorite baseball team has sputtered through the entire second half of the season without winning so much as a single series. (Now that's a run-on sentence to take home to momma.) I never bought Pack One of Finest, even though it debuted in 1993. In those days I was a sixth-grade whelp who was foaming at the mouth for everything baseball, especially if it was thin and rectangular. Of course, my lack of diligence concerning Finest probably had something to do with the price tag. When your allowance is a cool Alexander Hamilton, it makes stuff like the Topps base set or Donruss Studio a lot more appealing than those six-per-pack chrome shinies. A lot more cards for your buck. But a generation later, I've got to admit that there's something appealing about these cards. They're not exactly attractive design-wise, but they're so utterly different than anything else from that time. It looks more like a plaque than a baseball card. I think there's a place for that in the hobby. That being said, there's no way in hell I'm forking out $400 for an 18-pack box of this stuff.
Posted by Kevin at 9:20 PM

Great to see a Brady card. O's fan down here in Florida for over 30 years, originally from MD. Just found your blog, will add it to my favorites. Go Orioles

Wayne - Thanks! Always glad to have another O's fan on board.