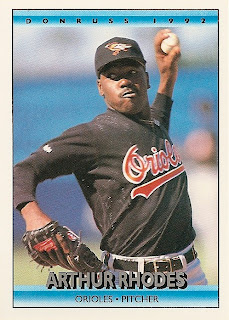 I'm hoping it isn't so, but Arthur Rhodes may have thrown his last pitch in the major leagues. The 41-year-old southpaw was cut loose by the Rangers to make room for new reliever Mike Adams. In 24.1 innings this year, Arthur was touched up for a 4.81 ERA. Of course, he was quite effective for the three seasons prior, so there's still a chance that someone takes a late-season flier on him as a lefty specialist.

Now if Rhodes really has reached the end of the line, he leaves behind a 20-year resume in the bigs. For giggles, let's look at the box score from his major league debut: August 21, 1991 vs. the Rangers at Arlington Stadium.

Incredibly, Ivan Rodriguez is still playing, grinding along as the Nationals' second catcher; he's collected 2,793 hits in 2,486 games since that one. Cal Ripken, Jr. has been in the Hall of Fame since 2007. Bob Melvin is now in his eighth season as a manager. Practically everyone in that Rangers lineup played until they were 50 years old, including Brian Downing, who debuted with the White Sox in 1973 and hung 'em up in 1992 at age 41. So between Rhodes and Downing, you've got nearly 40 years of continuous baseball history represented in a single game. And of course, the late Johnny Oates was managing the O's. They've had nine other skippers since. Eight of them have never managed a winning Orioles team.
Posted by Kevin at 10:31 PM

I've heard rumors the Cardinals may be interested in him. Tony LaRussa and Dave Duncan love rolling the dice on cheap pitching.

Glad Nolan Ryan Was not in that game

Matt - That's true. Buster Olney thinks that most of the National League contenders are good fits for Rhodes.