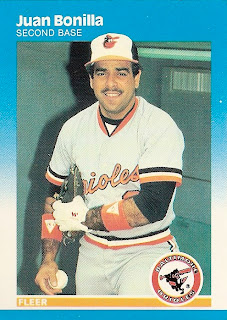 I just can’t seem to quit while I’m ahead, so I’ve gone and started another card blog…well, it’s on Tumblr, and I think you can substitute “Tumblr” for “blog” for some reason. They’re very good with their branding, even though they did that stupid Web 2.0 thing where you drop a vowel from a common word for no good reason.

But I’m getting sidetracked. My newest pet project is called Bad Touch Baseball, and it’s a much more minimalist endeavor than this blog and my 1965 Topps Project. As I’ve branched off into a more vintage-heavy collection in the past couple of years, I’ve been drawn to the hypnotic aesthetics of the 1970s: the brightly-colored polyester uniforms, the giant eyeglasses and sunglasses, the scraggly or teased-out hair, the oh-so-macho sideburns, mustaches, and beards (both bushy and wispy), the laughable Topps airbrushing, and of course the lack of quality control that led to unflattering poses and facial expressions being immortalized on cardboard. Each day, I will post a card from my collection that fits the criteria listed above. Of course, bad fashion and weird photos are not the exclusive property of one decade, so contenders from the 1950s, 1960s, 1980s, 1990s, and the current century will all receive their just due. But the primary targets are the 1970s and the spillover of the 1980s.

I hope that those of you looking to waste another 30 seconds of your day-to-day lives will stop by frequently to have a cheap laugh. If you’re a member of the Tumblr, you can follow me. If you’re not, you still might could tell your friends to stop by. I also hope that everyone understands that the site itself and the captions on each photo are nothing more than lampoons. I would never carelessly accuse a ballplayer of being a sex offender…unless they were convicted as such. Somewhere, Mel Hall’s ears are burning.
Posted by Kevin at 9:46 PM