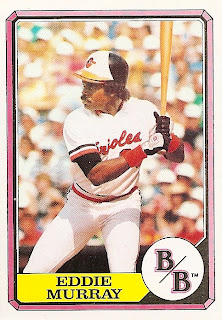 Last week, teacher/bloggingman Thorzul gave the rest of us an assignment: Show Me Your Cups. I've always been a good student if the subject matter interested me, so here are the goods. Please to enjoy a half-dozen souvenir cups. 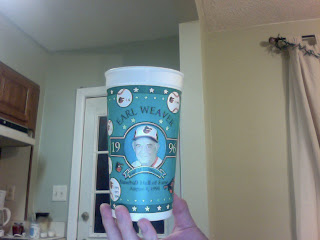 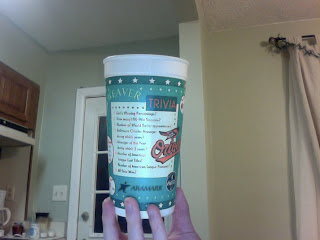 This fine specimen dates back to 1996, the year of the Orioles' only wild card appearance. It commemorates Earl Weaver's induction into the Baseball Hall of Fame on August 4. The little baseballs include the answers to the trivia questions about Earl's career which appear on the other side of the cup. 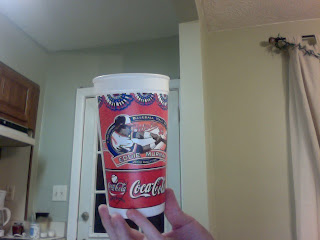 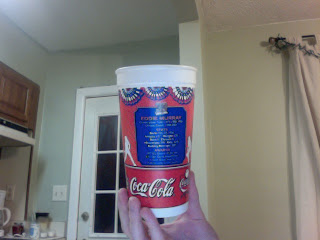 Fantastic cup number two is another Hall of Fame commemorative dealie. This one is from Eddie Murray's induction year of 2003. The top eleven position players in playing time that year? Brook Fordyce, Jeff Conine, Brian Roberts, Deivi Cruz, Tony Batista, Larry Bigbie, Luis Matos, Jay Gibbons, Melvin Mora, David Segui, and B. J. Surhoff. Hard to believe that team lost 91 games, huh? Anyway, that's a great picture of Eddie killing a baseball and perhaps his number 33 as well. The bunting is a nice touch, and the reverse side features a short bio. Wow, did you know that Eddie is 6'5"? That's a big dude. 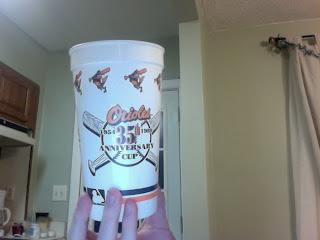 This one is a bit duller, but what do you want for 1989? The same design all the way around. It celebrates the 35th anniversary of the Birds' arrival in 1954, and is a nice keepsake from the "Why Not?" season in which the O's almost went worst to first. Horseshoes and hand grenades. 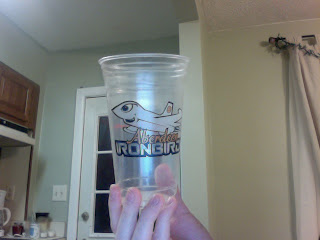 I snuck in a cup from the Aberdeen IronBirds, the Ripken-owned short-season New York-Penn League affiliate of the Orioles. The other side just has the name of the food and drink vendor at Ripken Stadium. Nothing to see there. 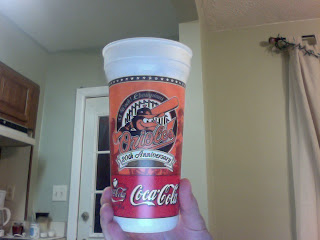 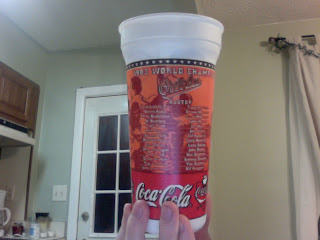 This is the tallest of my souvenir baseball cups, and another snazzy design. It's also from 2003 (busy year!), and marks the 20th anniversary of the 1983 World Champs. I dig the swingin' Bird in front of the World Series trophy. You might be able to see the team celebrating after the clinching game in the background image. The roster is also printed on the cup, everyone from manager Joe Altobelli to pitcher Bill Swaggerty. 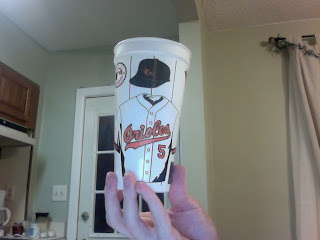 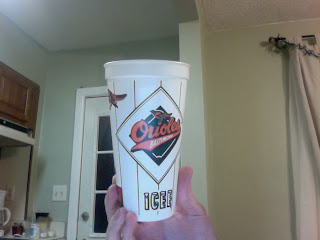 Finally, the only cup that wasn't purchased at a ballpark. In the mid-1990s, we used to shop at a K-mart that had a Little Caesar's Pizza in the store. They had an ICEE frozen drink machine. If you're unfamiliar with ICEE, think of a Slurpee only thicker and with seemingly more red or blue dye. My mom used to say that it was probably staining our insides, which is an odd thing to imagine. Anyway, they had special collector's cups for each major league team, and it's not like I needed a personal invitation to drink down that syrupy goodness. I had a few other teams, but of course I'm sticking to the home team here. This cup in particular was from 1994, as it has the commemorative 125th MLB Anniversary logo to the right of the O's jersey. I wonder whether they consciously chose #5 to represent Brooks Robinson. There's also the Oriole Bird cap logo, and the official logo. This was the last year that the logo included the "Baltimore" word mark. Of course, with the city name returning to the road jerseys and sleeve patches two years ago, all is forgiven.

So there you have it, six cups that I probably haven't used for their intended purpose since the day they were bought. But they're nice to look at, I'd say. Hopefully I'll get an "A" for this assignment.
Posted by Kevin at 10:19 PM