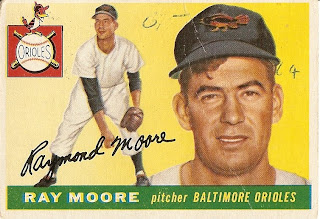 It occurs to me that I know absolutely nothing about Ray Moore, other than the fact that he looks downright adorable with that renegade lock of hair dangling down from under his cap. So it's time to play:

-Was a pretty good hitter for a pitcher, batting .271 in 1956 and clubbing six home runs in his career.

-Was signed by the Brooklyn Dodgers in 1947 and didn't make his major league debut until 1952, when he was 26. Didn't reach the majors to stay until 1955 with the O's, but had a good nine-year career from that point forward.

-Got a very tough no-decision on May 21, 1957. Ray gave up only one run, scattering eight hits and nine walks...in fifteen innings. He also struck out nine Tigers, and hit a third-inning home run off of his counterpart Jim Bunning to give the O's an early lead. After Jim Brideweser hit a one-out double in the bottom of the fifteenth, Wayne Causey pinch-hit for Moore and grounded out. The Birds stranded Brideweser in scoring position, and reliever Mike Fornieles blew the game by surrendering a run on two singles and a passed ball the very next inning. On the bright side, Ray did lower his ERA by 1.35 that day!

-In December 1957, Baltimore traded him to the White Sox in a seven-player deal. One of the players coming back to the Orioles in the swap was Hall of Famer Larry Doby. However, the O's sent Doby to Cleveland on the cusp of the 1958 season in another trade, and he never played a game in Charm City.

-Ray became a full-time reliever with the Senators/Twins from 1960-1963, and placed in the top seven in the A.L. in saves for three straight seasons with modest totals (by today's standards) of 13, 14, and 9.

-Was the first Orioles player to wear #29. Other notable 29s were reliever Dick Hall and outfielder Ken Singleton.