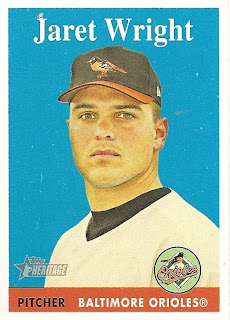 Tonight I'm going to talk more about 2010 Topps. So you may be wondering why I chose a card from the 2007 Heritage set, which borrows its design from 1958. I'll get to that in a moment.

Last night I planned to rip open just four packs of my hobby box, but none of those packs produced either of the two things that I was primarily looking for: an Oriole or a Million Card Giveaway code. So I tore into a fifth pack, and that did the trick. I nabbed Adam Jones (running the bases with tongue protruding Jordan-style) and a code card with Mickey Mantle on the front.

Before I tell you which card I unlocked with my code (oh, I'm all about suspense tonight), let me run down a few things I like and dislike about this year's flagship set. I've already voiced my approval for the base card design and photography, which is the most important thing. None of the inserts I've seen do much for me, though the "Cards Your Mom Threw Out" series has its good points. There's something lazy about reprints of past cards, but the first one I pulled was Robin Yount's 1975 Topps rookie card. I'm planning to complete the 1975 set, and given the dollar value of the Yount card, I'll be needing this reprint to stand in as a placeholder for some time. So that's decent, and if you were to collect the whole "Yo Momma" insert set (as other bloggers have dubbed it) you'd have a great visual representation of the history of Topps cards from the early 1950s to the present day. On the other hand, reprints of cards from the past ten years? Pointless. Whose mom threw out their prized 2003 Kevin Youkilis card, and would this hypothetical person be torturing themselves over the loss of such a fine piece of cardboard? Meanwhile, many of the reprints (primarily the recent ones) are poor in quality. The pictures look blurred and pixelated. Someone goofed. I also strongly dislike the hideous new Rookie Cup design, but night owl has tackled that issue better than I could have.

Okay, now that you've endured my griping, let's get to the fun stuff. I logged into toppscards.com last night and checked the sidebar with its list of ten recent unlocked cards. Unlike the first week, when there was a flood of 1980s cards, or last weekend, when 1970s cards were being spit out willy-nilly, last night's list featured a hodgepodge of decades. Great, I finally got around to buying this stuff, and they actually decided to randomize the distribution of giveaways. So I typed in my code, took a deep breath, clicked the "unlock" button, and the following card loaded...

George Crowe, 1958 Topps #12. So awesome. The team-colored specs. The commie-fearing "Redlegs" nickname. The mascot with pillbox cap, handlebar mustache, and demented grin. The forgotten player who hit 31 home runs in 1957 as an injury fill-in for Ted Kluszewski. Oh, and did I mention that this card is 52 years old? I could unlock 1987 Topps cards with the rest of my codes, and I'd still be happy. (Okay, maybe that's overstating it.)

Hmm, I didn't mention anything about Jaret Wright, did I? Some other time, perhaps.
Posted by Kevin at 10:42 PM

You're right about reprints from the last 10 years, it's just lazy. Plus my mom wouldn't throw out my 2003 Youkilis. I'd probably be the one throwing that card out! Good pull on your million card giveaway. The best part is that you could probably trade the one you got for a comparable O's card from the same era. One of my redemptions was a Yankee from '71 Topps and I made an offer for a Merv Rettenmund from the same set. Low and behold, somebody accepted my offer! Good luck with the rest of your redemptions and keep us posted!

Thanks Ryan! I think I'm going to keep the Crowe, just because it looks so cool. But last night I unlocked a 1964 Don Blasingame and I'm going to shop that around, maybe for one of the cards I need in my 1965 set.

A week or so ago I did something I haven't done in ages... bought packs of new Topps cards. I paid $10 for a box which had 5 packs and promised some other crap. My wife wasn't with me so I figured "Why not?".
The cards have a nice design but too many of the are horizontal for my taste. Unless the whole set is that way I prefer vertical designs except for the old World Series and league Leader cards. Well, I got two Orioles, Ty Wigginton and Cesar Izturis . The card my Mom Thru Out was a '74 Dave Winfield and as mentioned it looks like sh_t, like they made a copy on a junk color copier.
Hey Kevin, if you need the Winston Llenas to complete your 75 set some day. I'm your man. that gem was my Million Card giveaway that I unlocked online.

Wow, I wish i could edit that post for grammar and punctuation. LOL

Bob - Yeah, horizontal cards disorient me at times too. So far I have gotten three O's in 12 packs: Luke Scott, Adam Jones, and Melvin Mora. I'll see if I need that Llenas card...maybe I'll make an offer!