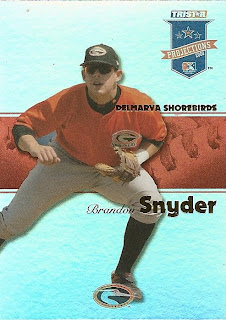 First base prospect Brandon Snyder just got the news last Friday that he's headed back to the minor leagues to start the 2010 season. The good news for the Orioles' 2005 #1 draft pick is that he might not be there long, if he can hit more like he did in the first half of 2009 at AA Bowie (1.018 OPS) as opposed to his underwhelming second-half numbers at AAA Norfolk (.671 OPS). He's still 23 years old, his defense at first base drew raves in spring training, and Garrett Atkins isn't expected to have a lengthy stay in Baltimore.

Of course Brandon is bound for Norfolk, but I'm traveling to Salisbury, where he played for the Shorebirds in 2006 and 2007. Tomorrow I'm taking my first overnight trip for my job. While it may not be as remote as New Mexico or as exotic as Puerto Rico (to name a few of the locales where my coworkers have traveled on business in recent months), it's still kind of a refreshing break from routine to kick back in a spacious hotel room for an evening. It's too early to catch a Shorebirds game, but I'll try to enjoy the sights and sounds of this Eastern Shore outpost anyhow.
Posted by Kevin at 11:45 PM