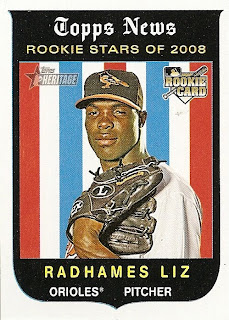 Today I became reacquainted with one of the finest rites of the Hot Stove Season: bidding a fond farewell to the flotsam and jetsam of the recent past. In plain language, Radhames Liz is San Diego's problem now.

Look, I wanted to like that lanky Dominican kid. He looks pleasant enough, and he's got a fantastic name. His first name has "rad" AND "ham" in it. The nickname possibilities were endless. At Camden Chat, he was known as "Totally Rad", a nod to the NES game. I preferred "Rad Radford", because I'll work in a pro wrestling reference whenever possible.

Of course pesky, ugly reality had to interject itself into the proceedings. The reality was that Radhames was, and as near as I can tell still is, more of a thrower than a pitcher. Over three seasons, he has tossed 110.1 innings and allowed a spooky 208 base runners (1.885 WHIP). 92 of those runners have scored on his watch, for a sparkling 7.50 ERA. His strikeout-to-walk ratio is 1.08, which is decidedly not good. That giant "L" on his glove seems pretty fitting, yet his won-lost record in the majors is a so-so 6-8. When you factor in the club's overall record in his games, it's a more appropriate 10-18.

In recent years, any time the O's rid themselves of an overmatched pitcher there would be another one ready to hoist himself off of the junk heap to take his place. If you look at the 40-man roster and the likely pitching staff for AAA Norfolk, you'll still see a few candidates for that role in 2010. However, I really do believe that there are less of them now than there used to be. I have to believe that. Meanwhile, I'm actually a bit jealous of Rad Liz. After all, there are worse places to work than San Diego.
Posted by Kevin at 10:14 PM

You've used "lanky" in two straight posts. See how many you can do in a row.

There comes a time when you have to pack it in on a guy. Tough to do w/ Liz - I mean he sure can throw the ball...

alas as you say though, he is a thrower - and he may always be.

I think it was easy to be enamored by him as it was Danny Cabrera when they were in AA. Unfortunately, not all guys that look good there translate into good on the mound at the major league level. I wish Liz well in SD...
Happy Thanksgiving!

Ugh, you just reopened a wound of mine. I pulled the Liz black border refractor version of this card (/59).

As an Orioles fan I was psyched at the time. The problem is I am a fan of the major league club, not AA Bowie dominance.

Now I don't know whether to wish Liz well or root for him to continue to fail. Catch 22.

William - What a lanky thing to say.

deal - At least he never hit the mascot.

Craig - Happy Thanksgiving to you!

Ken - Well, there's no use in holding a grudge against a guy for being a crappy pitcher...especially if he was relatively cheap.