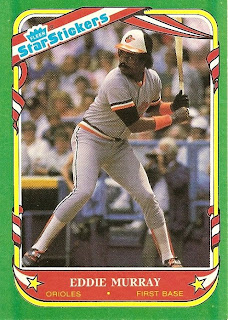 Every once in a while, we can all use a reminder that Eddie Murray was (and is) one bad mamma jamma. Fortunately, SC, the tireless purveyor of Camden Chat, has put together an entertaining fantasy tournament of sixteen teams from Orioles history. The games are simulated at WhatIfSports, and he recaps the results of each best-of-seven series back at CC. You can follow along here. It's a great time-waster/argument-starter, and it's a chance to reminisce about some of the best and worst teams that Baltimore has to offer. So far, Dave Trembley's 2008 team is putting up a surprising fight against Davey Johnson's wire-to-wire 1997 juggernaut. But the unequivocal superstar of the first round is Mr. Eddie Clarence Murray, 1983 vintage. His stat line in a four-game sweep of Sam Perlozzo's crummy 2006 squad: 13-for-20 (.650 AVG), 5 HR, 15 RBI. Once again, that's in FOUR GAMES. He's driving in nearly four runs per game. Beastly.
Posted by Kevin at 2:51 PM

Man, did I love Eddie Murray! Did his job and never said a word. I mean that literally. I almost thought he was mute. Several years into his career I heard him speak to a TV guy. It was weird to heard him actually talking. Like you wake up one day and your cat asks you for a snack.

Orioles to me is Cal Ripken and Eddie Murray! These two players I remember from growing up and hanging with my buds trying to learn how to collect baseball cards. The Orioles are the first pro-baseball team I was introduced to (originally from Oklahoma)...and they have become my team.