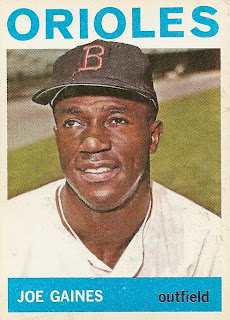 It has been exactly 50 years since President John F. Kennedy was assassinated while riding in a motorcade in Dallas. That day also happened to be the 27th birthday of Orioles outfielder Joe Gaines; I can't imagine that he felt much like celebrating.

Gaines is the type of player that falls through the cracks of baseball history. His major league career spanned the years 1960 through 1966, but in three of those seasons he received little more than a cup of coffee. He played his best ball with the O's in 1963, when he appeared in 66 games as a fifth outfielder and pinch hitter. That year, Joe batted .286 with a .381 on-base percentage and .476 slugging percentage, and had six home runs and 20 RBI. But he started slow in 1964, and was dispatched to the fledgling Astros. By 1965, young Rusty Staub had replaced Gaines in the starting lineup. He prolonged his career by jumping to Japan in 1969, spending one season with the Hanshin Tigers. He's still alive and presumably well at 77 years of age.
Posted by Kevin at 5:08 PM

You just don't see many of those '63 home caps on cards. The Gaines, McNally and Bauer cards in the '64 set, maybe someone who I'm forgetting.

My mom's birthday is November 21 and she always says Lee Harvey Oswald ruined her 15th birthday. I think my mother might be tad self centered about the whole thing.