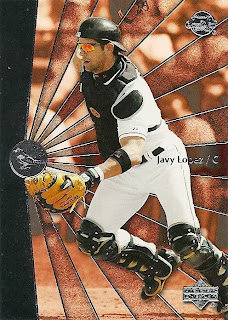 Today is Javy Lopez's 43rd birthday. Time flies, don't it? The former Oriole catcher played his last game seven years ago, and it's been a few months shy of a decade since he cashed in on an anomalous .328/.378/.687 season (with 43 home runs, no less) and inked a three-year, $22.5 million free agent deal with the Birds. Though Javy was a big-name player and I've got dozens of his cards from his 2004-2006 tenure in Baltimore, I've only featured him seven times in the near-six-year lifespan of this blog. I've come to the realization that I don't have any strong affection for Lopez, nor do I bear any antipathy. He didn't have any strong personality traits that I could tell, and there wasn't much that was memorable about his stint with the Bad Old Orioles of the decade past. He came, he hit well (.293/.343/.468, 46 HR in 329 games), he fielded poorly, he got pushed out the door by Ramon Hernandez. I understand that many fans of the female persuasion found him pleasing to the eyes. But he was not energic and tempermental like Miguel Tejada. He was not an overachieving fan favorite like Melvin Mora. He was just sort of there, until he wasn't.
Posted by Kevin at 10:23 PM

He was a middle of road guy who didn't anger anybody and put up decent defense and a decent bat again like you said no one complained cause he was so avg. i'm not saying that in a bad way because he was a heck of lot better then the guys he replaced (Fordyce and Gil)