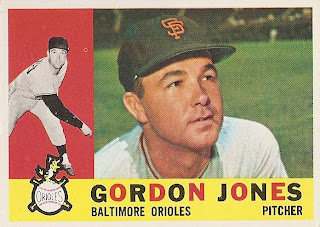 Topps scrambled to categorize righty Gordon Jones as an Oriole in its 1960 base set. On November 30, 1959, the Giants had dealt him to Baltimore along with outfielder Jackie Brandt and catcher Roger McCardell. In return, San Francisco received a pair of Billys, pitchers Loes and O'Dell. Though Gordon's posed "action" photo in the left margin featured a blacked-out cap logo, they decided not to ugly up his close-up portrait in the center of the card. So Gordon keeps his Giants cap in one picture, anyhow.

I'm not necessarily rooting for Jones' Giants in this year's World Series, but I'm not rooting against them either. I'd just like to see the Tigers get a chance to celebrate for the first time since Sparky Anderson's 1984 powerhouse. Most importantly, I hope it's a long and competitive Fall Classic. How about you?
Posted by Kevin at 11:57 AM