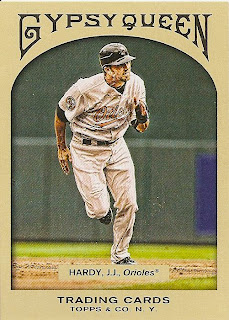 The Orioles went nearly a full decade (2000-2008) without winning a single Gold Glove Award at any defensive position. Now they've picked up a half-dozen in the past four seasons combined.

Yesterday, the O's took home three Gold Gloves, the most of any team in baseball. For the first time, J. J. Hardy's defensive excellence was recognized by his peers in the dugout. Hardy's a worthy winner; every time I see him backhand a tough hop or spear a line drive, I'm grateful that he's playing in the middle of the field for my team. He is the first Baltimore shortstop to receive this honor since Cal Ripken, Jr. nabbed his second (and final) Gold Glove in 1992. Speaking of two-time winners, the other two Birds' honorees each have received a gaudy Rawlings trophy before: center fielder Adam Jones (who first won in 2009) and catcher/bane of baserunners/pitcher whisperer Matt Wieters (who took home the prize in 2011). I'm a bit surprised that Jones won again this year, as Angels wunderkind Mike Trout earned plenty of attention for his outfield exploits, but I'll never complain about the Orioles getting a little extra recognition.

The recent Oriole drought in Gold Gloves allowed the Yankees to pass them for the most all-time in the American League. However, last night's triple play brings the team's historical total to 64, just one less than New York's 65. Hear those footsteps, Yankees?
Posted by Kevin at 11:20 PM