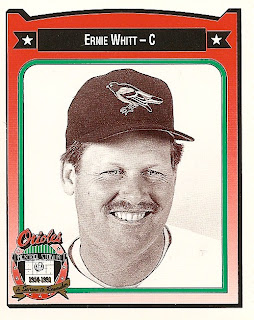 Here's another one from the "When the hell was he an Oriole?" files. The answer is 1991, of course. But not for too long. Ernie Whitt, known chiefly for the dozen years he spent behind the plate in Toronto, was 39 years old and at the end of the line when he made the O's roster as a third catcher behind rookie Chris Hoiles and Bob Melvin. But Ernie was a shell of the player who socked double-digit home runs for the Blue Jays in eight straight seasons (1982-1989). The veteran made only 70 plate appearances in 35 games over the season's first three months, putting up an underwhelming slash line of .242/.329/.274. He did not hit a single home run, and drove in just three runs. The Birds released him on July 5, bringing an end to his long career. On the plus side, he did throw out 6 of 17 would-be base stealers, a slightly above-average 35% rate. What more can you ask for from your 39-year-old third catcher than slightly above-average?
Posted by Kevin at 10:28 PM