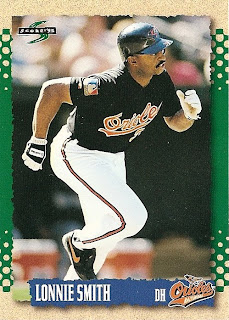 Today is the fifteenth anniversary of an especially lousy day, both for baseball at large and for me as a fan. On August 12, 1994, the Major League Baseball Players Association officially went on strike, a move that led to the cancellation of the remainder of that season as well as the World Series. It was the first time since 1903, when the Fall Classic was still in its infancy, that there was no World Champion crowned in baseball. The work stoppage dragged on into 1995, leading to the replacement player fiasco (with 26 of 28 MLB owners opening camp with minor leaguers, retired players, and other hangers-on). Eventually, a resolution was reached, but not before 18 games were chopped off of the 1995 regular season schedule for each team.

Of course, baseball also took a beating in the court of public opinion. Many fans were slow to return the following year, and undoubtedly there were some who never did. For me personally, it was a punch to the gut; I was twelve years old and it was to be my first full season as a baseball fan. I had devoured the preview magazines, listened to Spring Training games on the radio, attended a handful of games in the early summer, pored over the box scores and weekly full-team statistics in the Baltimore Sun, watched all of the televised games I could find (not just the Orioles, but the various games of the week on ESPN and ABC and NBC, Braves games on TBS, and Mets games on WWOR), plugged all of the real-life player names into the rosters on Ken Griffey, Jr. Baseball for the Super Nintendo...I had baseball fever something fierce. Then, just as the pennant races were heating up, it was all taken away from me. Poof.

As far as the impact on the Orioles, it manifested itself in different ways. Most notable was the temporary halt to Cal Ripken, Jr.'s pursuit of Lou Gehrig's consecutive games played record. He would finally reach 2,131 the following September, but he would have had his streak broken in 1995 had the replacement players been allowed to take the field on Opening Day. Ugh.

Mike Mussina was famously snakebitten for much of his career when it came to topping 20 wins in a single season, but he likely would have topped that total in his third full season had the final fifty games been played. As of August 12, he was second in the American League with 16 wins (against five losses) and fourth in ERA (3.06) and WHIP (1.16). It's also possible that the strike cost Mussina a better shot at 300 career wins. He retired with 270, but probably missed 13 to 15 starts in late 1994 and early 1995. If he wins half of those, maybe he's close enough at the end of 2008 to be convinced to come back and chase the milestone.

The team at large lost a chance at their first postseason in a decade. When play stopped, they were second in the reconfigured A.L. East with a 63-49 record, 6.5 games behind the rejuvenated Yankees. The Orioles won their final two games of the year, both against New York. Even more tantalizing, they stood 2.5 games behind the Indians for the first-ever Wild Card. The only other club in the American League within shouting distance was the Royals, who were a game and a half back of the O's. If Baltimore had indeed made it to the playoffs, it could have saved the job of manager Johnny Oates, who was fired by owner Peter Angelos during the winter. He went on to lead the Rangers to the postseason several times, whereas the Birds are now on their seventh manager since his departure.

Of course, some players never returned from the strike, including four Orioles: relievers Tom Bolton and Mark Williamson, mulleted backup catcher Jeff Tackett, and veteran outfielder/designated hitter Lonnie Smith. Smith, also known as "Skates", had the distinction of playing his final game of a 1,613-game career in the team's last game: August 10, 1994. He went 0-for-2 with a walk before Harold Baines pinch hit for him. What a way to go.

Baseball has its problems now, but at least they're still playing.
Posted by Kevin at 10:53 PM

Wow . . . 15 years already. And I had no idea Lonnie Smith once played for the Orioles.

Took me the better part of 10 years to really care about baseball after the '94 strike. I've been back watching for awhile now, but I won't ever be as big a fan as I was.

Oddly, the strike did little to douse my baseball appetite, I came back in 1995 happy and ready for more. Kinda like walking in on your wife cheating on you and not paying it much mind; i just chalked it up to everyone's collective stupidity and moved on. Grudges were never my strong suit.

And Skates was a lucky charm - he made the post season with all his teams - Phils, Cards, Braves....therefore I can only conclude he would have made it with the O's.

Smith got the name skates because he was always falling down and then turned that into a great play - and the one time I saw him an Oriole in an exhibition v the Phils, true to form he fell down running to first base.

as I recall the O's won the game.

I didn't realize Lonnie Smith was in the majors that long. cool.

Jim - They traded for him in late 1993, and he was one of four Smiths to play for them the next year (Dwight, Lee, and Mark as well).

Bob - I think my uncle feels the same way.

deal - Did he make it safely to first after falling?

Ken Griffey Jr.'s Baseball was the best the baseball game. I did the same by plugging in the real player's names from baseball almanac since I didn't have internet then. Wow...that takes me back.