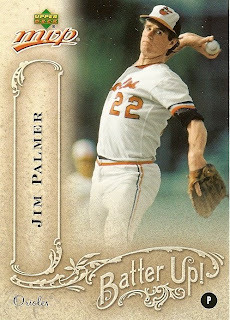 With his win earlier this evening, 45-year-old Randy Johnson became the 24th pitcher in baseball history to win 300 career games. I don't necessarily buy into the talk that he could be the last to ever do it, what with specialty relievers and five-man rotations and the rock and roll music and what have you. I read a thought-provoking piece by Bill James and Joe Posnanski that points out that this decade has been a boom period for 300-game winners. Johnson would be the fourth pitcher to reach this milestone in the Aughts (following Roger Clemens, Greg Maddux, and Tom Glavine). There were none in the 1950s or the 1970s, and Tony LaRussa wasn't even around in those days to receive the blame. The four aforementioned guys managed to do it because they were quality pitchers year-in and year-out for a long time. As Posnanski elaborates on his blog, you never know how a pitcher will age. The winningest pitchers by age 25, 27, 29, and 31 never got to 300. The guys that have done it won more games on average from 35-39 than they did in their "primes" of age 25-29. Longevity is the name of the game when it comes to the three-oh-oh.

Of course, it's always been (and will continue to be) pretty dang hard to win that many games. Jim Palmer was the greatest pitcher in Orioles history, and never got to 300. He won 20 games eight times in a nine-year span, threw 3,948 innings in his career, and didn't quite make it. If he doesn't miss most of 1967 and all of 1968 with injuries, he probably does it, but we'll never know. He's in the record books with 268. How about Mike Mussina? Pitched for 18 years, won double-digit games in all but his rookie year (when he was called up in August), and bowed out with 270 Ws. He retired after his first-ever 20-win season, so he could've kept going. But taking into account his age and his other recent seasons, Moose acknowledged himself that it could take as many as three years to get those last 30 victories and he just couldn't commit to that.

So here's to Randy Johnson. He might not be the last 300-game winner, but you never know how long it will be until the next guy.
Posted by Kevin at 9:56 PM