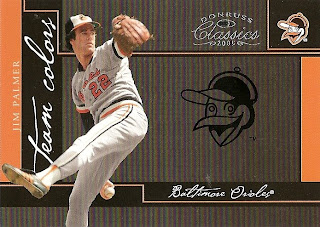 I just realized that I never told you guys about the outcome of my commercial audition for MASN. I didn't get picked, because I was too good-looking. Well, that's not what the rejection email said, but I chose to read between the lines. On the bright side, instead of spending a day stuck in some stuffy studio taping the ad, I got to stay at home and recover from the previous day's flight home from San Diego. As my new Nintendo Wii arrived in the mail that day, the timing was pretty fortuitious.

One of the lucky few who did get chosen for the ad campaign was fellow Camden Chatter "jobe", who I had the pleasure of meeting at the auditions. If the commercials pop up online, I'll link to his spot later! I might not be joining Jim Palmer as a popular television pitchman, but I will gladly settle for a little vicarious living in that regard.
Posted by Kevin at 10:51 PM

Good to see one of the few modern cards I own show up on the blog.

Bob - It's a good one, isn't it? I love that classic wild-eyed Oriole bird logo.