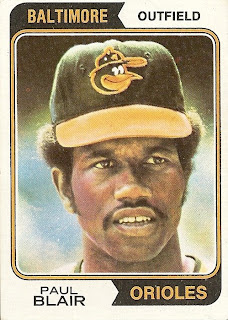 This card comes from the days when Topps still printed a player's full name (first, middle, last) on the card back. In my childhood, this was the domain of Donruss. In the days before Baseball Reference, these cards provided an endless source of amusement. One of my favorite embarrassing middle names belonged to Mr. William Nuschler Clark. "Will the Thrill", indeed. I also remember the Ripken boys, Calvin Edwin and William Oliver. To see their uncommon middle names, you'd have to imagine that Mama Vi was a fan of Charles Dickens. Then there's the occasional error that would slip through Donruss' quality control. Bruce Lee Hurst is a pretty cool name, reminiscent of the kung fu film legend. But in 1991, his card back read Bruce "Vee" Hurst. That's just silly.

The back of this particular card lends an air of mystery to the defensively gifted center fielder lovingly known as "Motormouth". His name reads, "Paul L D Blair". No name, just initials. But are they even initials? You'll notice that there are no periods after "L" or "D". Quick trips to Baseball Reference and Wikipedia have his name in the same format, with no explanation as to why it is so. The Internet is not infallible, so I've consulted my bookshelf: one encyclopedia reads "Paul L. D. Blair", but Total Baseball is sans periods.

None of this brings me closer to an answer. Is this a Harry S Truman situation, in which his parents couldn't agree on a middle name and compromised with the enigma of a letter or two? Or did he have some embarrassing Nuschler-esque monikers that he worked hard to bury at the onset of his baseball career? Inquiring minds want to know.

In the meantime, we can attach our own interpretations to Paul L D Blair. Might I suggest "Long Drive"? He was never much of a power hitter, though his solo home run clinched the Orioles' first World Series over the Dodgers in 1966. How about "Lord of Defense"? It's a little haughty, but if Michael Flatley gets to lord over something, then surely an eight-time Gold Glover should be able to flaunt it. Perhaps "Leather Dazzler"? Nope, that sounds more like an exotic dancer or a soap opera character. I'll open this one up to the rest of you.

What DOES the L D in Paul L D Blair signify?

I really wish the Orioles would bring back at least the caps that they had... ie the "cartoon" bird....

Have you noticed that once they canned the cartoon bird how the fortunes of the Orioles went downhill??

I'm with you on the middle names on the card backs. I called in on our local radio station's trivia day once and the category I got was "We'll give you the nickname; you give the real name"

- Bake McBride; Arnold Ray McBride...they couldn't believe how quickly I'd rattle them off, just because I'd read them hundreds of times on the backs of baseball cards. Unfortunately, after getting McBride, Dizzy Dean, and Dusty Baker, I couldn't get Bip Roberts. I was more of a 70's collector than an 80's guy...