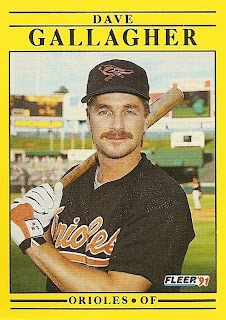 Here we see Dave Gallagher managing not to squint in the face of an onslaught of blinding yellow borders. He's smiling for the camera during pre-game warm-ups in a stadium I can't quite pinpoint; I believe it's Kauffman Stadium in Kansas City. Dave's orange, black, and white batting glove reads "S-M M". Is that the size of the glove? It seems a bit inexact. It could be the initials of the manufacturer, but I don't know. I seem to be falling short of providing you any vital information on the finer details of this card photo.

Failing that, I'll look at the card back. Let no one say that Dave Gallagher never paid his dues in the minor leagues. He'd played over six hundred minor league games in five years before getting a peek at the big time with the Indians as a 26-year-old in 1987. He spent much of that time in less than ideal climates, to say the least. Just check this line out: 1982 was split between Chattanooga and Waterloo (Tennessee and Iowa, not bad), 1983 was Buffalo, and then he spent three whole seasons at Maine (1984-1986). Besides his fifteen games in Cleveland in '87, he spent a dozen games back at Buffalo before being traded to the Mariners, who assigned him to Calgary, which just happens to be in Canada. Perhaps sick of being shuttled around, Dave chose his own destiny by signing with the White Sox as a free agent that offseason. At the beginning of 1988, he found himself...in Vancouver. Brrr. The ChiSox recalled him in May, and he hit like a man possessed (.303 in 101 games). Do you think he was tired of being exiled up North?
Posted by Kevin at 9:05 PM